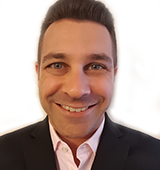 Born and raised down the street from Apple’s original headquarters in Cupertino, California, some might say Dan was born with digital in his veins.

In 2007 Dan truly found his calling when the iPhone and App Store were launched. He quickly immersed himself into the mobile platform and has spent the last decade of his career handling full-scale mobile strategy for notable brands that include NBCUniversal, MillerCoors, Kroger, Arby’s, Hasbro and more.

Whether you need an app built or just more downloads for one you’ve already got in market, Dan can help. Want to create an augmented reality bus shelter? He’s your guy. Need to understand how your traditional campaigns are affecting your brick-and-mortar store’s foot traffic? Dan’s got you covered there too. To put it simply, if it can be done on or connected to a mobile device, Dan’s done it!

When he’s not dealing with Fortune 500 brands, he spends his spare time working as a CTO – that’s Chief Tickle Officer – to his son Liam. Dan enjoys soccer, golf, water skiing and a perfect four-finger pour of single barrel whiskey on the rocks.

Old enough to remember paying for internet by the minute, but young enough to know how to speak to today’s on-the-go millennials. Dan’s got you covered no matter what demographic you need to reach.