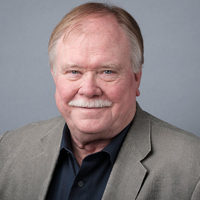 Michael’s unique ability to see the whole spectrum of a client’s problem and provide real world solutions has made him an important member of our team. By the way, he’s also an award-winning author of nine books on computer software. Talk about that maximizing every opportunity!

Even though he possesses over-the-top critical thinking skills, Michael is never afraid to pull up his shirtsleeves and get down to the nitty gritty work that needs to be done. He will try on every hat in the room in order to gain perspective and deliver the best solution for a particular client’s needs.

What makes Michael such an integral part of the Haig Barrett team is his deep understanding of our strategic approach and problem-solving process. He has helped us focus on seeking the pivot, the edge that reveals a critical angle. Michael recognizes that a new approach and new solution can change the value equation.

Throughout his career Michael has been actively involved in product launches for large scale companies including Toyota, Xerox, IBM and others, including the $8 Billion+ Xerox Xenith Project in 1989-90. He has also worked as strategic product launch developer for Ogilvy New Media New York, working with European, Israeli and Asian clients onboarding to U.S. with new products and building their PR presence.

Something else clients can count on with Michael is a genuine devotion to his work. He’s there from start to finish. From the very inception to the very execution of a solution, Michael is there every step of the way.

In his free time, Michael likes to entertain guests in a home he has carefully designed for his friends and family to enjoy. He’s also a member of the Magic Castle. Michael believes a little magic can change your perspective on everything.

If asked what his secret super power would be, Michael remains philosophical. Explaining much like an artist works to create an image by identifying the negative space around an object to make that object appear, he would use his superpower to see the whole picture. He would most like a power that enables him to see the things that his clients are not looking at or paying attention to.

It’s this “big picture thinking” that gives Michael the power to create beauty and magic with every task he’s given. Michael helps us seek and find the hidden path, so we can see our work in a different way that yields new and better results for our clients.